An increased intake from external antioxidants is critical given the high number of toxins we take on daily.  GENEWAY™ Antioxidant helps neutralize free radicals and provides protection at a cellular and DNA level. This powerful antioxidant formula contains effective neutraceuticals for improved general health, protection and detoxification.

The structures inside cells are very vulnerable to free radical damage and the body is genetically programmed to protect itself against said damage. When structures such as DNA become damaged, they can accelerate the ageing process and increase the risk of many chronic diseases. Antioxidants have been shown to break down or neutralize pro-oxidants and free-radicals in the body. Pro-oxidants are created especially during exercise, chemical exposures, inflammation, infections, nutrient deficiency, obesity and stress. The more pro-oxidant insults you experience, the more you will likely need antioxidants. Here at petersmanjak.com, we offer a variety of antioxidant support: Vitamin E, Vitamin C, SOD, PQQ, and glutathione. Our two most popular and powerful antioxidant support supplements are PQQ and  Glutathione.

A diet deficient of antioxidants or mutations in the antioxidant genes means the required biological functions to protect against free-radicals are impaired. Therefore an increased intake from external antioxidants is critical.
GENEWAY™ Antioxidant helps neutralize free radicals and provides protection at a cellular and DNA level. This powerful antioxidant formula contains effective neutraceuticals for improved general health, protection and detoxification.

ALA is a potent anti-oxidant compound. In supplement form, it has shown benefit for various forms of oxidation and inflammation. These effects protect against heart and liver diseases, diabetes and neurological decline associated with ageing. It works with mitochondria and the body’s natural anti-oxidant defenses. Drug interactions: In high doses, ALA can decrease blood sugar levels and diabetic medications may need adjustment. Taking ALA might interfere with treatments for under-active or over-active thyroid.

Coenzyme Q10 (COQ10) is an antioxidant found throughout the body, but especially in the mitochondria of the heart, liver, kidney and pancreas. It has a critical role in producing energy for the body. In its reduced form (ubiquinol) it can sequester some free radicals directly via conversion to its oxidized form (ubiquinone). Several diseases are associated with low COQ10 levels, including fibromyalgia, post-myocardial infarction, depression, male infertility, migraines and Parkinson’s.

Drug interactions: In high doses, COQ10 seems to decrease blood pressure and may augment the actions of antihypertensives, interact with warfarin and some chemotherapy drugs.

Glutathione acts as the master antioxidant in the body and is used by every cell in the body. It also detoxifies various chemicals. The body synthesise its own glutathione via enzymes that are encoded by genes. If gene mutations are present, glutathione production is significantly reduced. Poor diet, pollution, toxins, medications, stress, trauma, ageing, infections and radiation also deplete glutathione. Lower glutathione levels go together with poorer health. Drug interactions: None known.

Manganese is an essential mineral in the diet that serves primarily as a component of the antioxidant enzyme known as manganese superoxide dismutase (MnSOD). MnSOD is the only enzyme that is essential for the survival of life in an aerobic environment under physiological conditions. MnSOD transforms superoxide produced by the mitochondria into the less toxic hydrogen peroxide and oxygen. This function allows SOD2 to clear mitochondrial ROS and, as a result, confer protection against cell death.
Drug interactions: In high doses, manganese may interact with quinolone and tetracycline antibiotics.

Resveratrol, a beneficial molecule known for its content in wine, is a potent antioxidant and has anti-inflammatory properties. It appears to be effective at protecting the heart and blood flow and may be an insulin sensitiser. Sources of resveratrol in food include the skin of grapes, blueberries, raspberries, mulberries and peanuts.

Selenium is an essential trace mineral that is recognised for its anti-oxidant capabilities. It forms a part of anti-oxidant enzymes such as glutathione to confer protective effects. It also is vital for thyroid functioning. Brazil nuts contain the most selenium per gram of any measured food.
Drug interactions: In high doses, selenium might slow blood clotting and thus interact with anticoagulants.

Vitamin A refers to a group of compounds that serve important roles in modulating skin health, vision, gene transcription and immune system functioning. Retinol (retinyl) palmitate is the active ingredient GENEWAY™’s Antioxidant. Retinol is easily absorbed by the body and known to help repair damaged tissue and is beneficial in counter-acting free radical damage. Individuals with mutations in the BCMO1 gene require vitamin A in the retinol format, since they are unable to convert plant-based vitamin A, carotene, to the active form, retinol.
Drug interactions: In very high doses, vitamin A can interact with some antibiotics and warfarin.

Vitamin C, or L-ascorbic acid, is a water-soluble vitamin and sequesters free radicals in the body. It is replenished by antioxidant enzymes and is often used as a reference drug in antioxidant research. Vitamin C’s structure allows it to act on neurology and depression, as well as interact with the pancreas and modulate cortisol. Its antioxidant properties mean vitamin C provides neuroprotective effects and benefits for blood flow. By protecting the testes from oxidative stress, vitamin C can also preserve testosterone levels.

Vitamin E (alpha-tocopherol) is a fat-soluble compound with distinctive antioxidant activities. Vitamin E is an integral part of cellular membranes whose main role is to defend the cell against oxidation. It is the first line of defense against lipid peroxidation by stopping the production of ROS formed during fat oxidation. Vitamin E is involved also in immune function, cell signaling, regulation of gene expression and other metabolic processes.
Drug interactions: In very high doses, vitamin E can interact with cyclosporine and warfarin.

Turmeric is a spice commonly used in curry, which has curcumin as the main bioactive compound. Curcumin has powerful anti-inflammatory effects and is a very strong antioxidant. Curcumin is a potent antioxidant that can neutralise free radicals due to its chemical structure. In addition, curcumin boosts the activity of the body’s own antioxidant enzymes.
Drug interactions: In very high doses, turmeric can interact with warfarin.

Take two to four capsules daily. Alternatively, take one capsule per mutation.
Do not exceed 5 capsules per day.

If you have conducted a genetic report, you may be highlighted to the fact that specific gene mutations require antioxidant support.

This product has not been evaluated by the Medical Control Council. This product is not intended to diagnose, treat, cure or prevent any disease 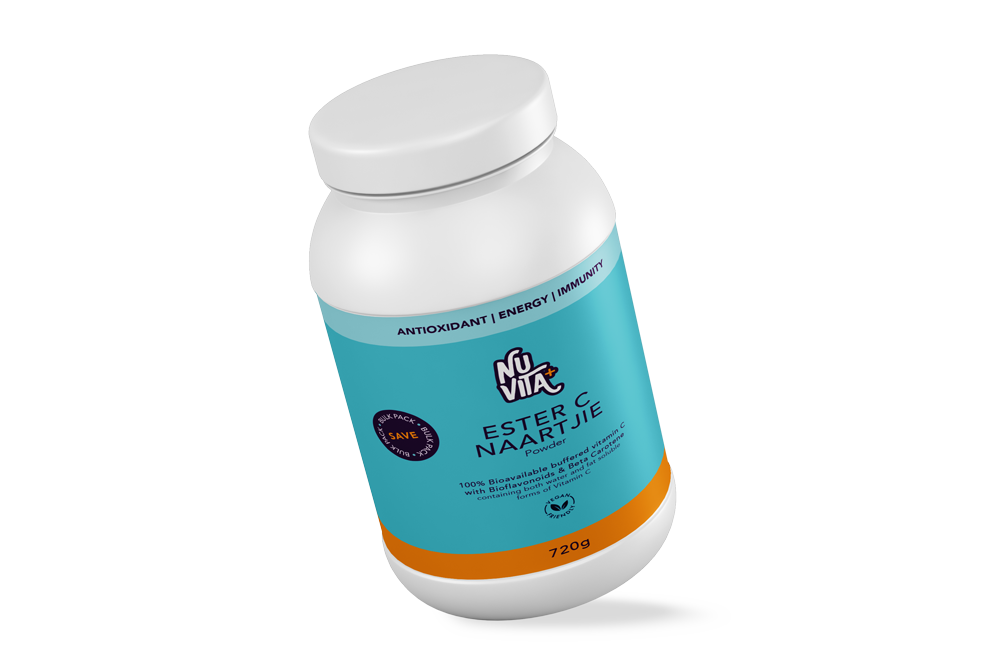